It’s great to see the days getting a bit longer. I’m sure it would make the fact that I have to get up for mid sleep puppy toilet breaks worse if I had to leave the house in the dark on a morning! The temperature has dropped again though and I needed my gloves.

Sometimes it’s just nice to have a bit of easy food (these are on ‘the list’), we had our hot dogs with mustard, ketchup and caramelised onions. They remind me of holidays.

Tuesday’s meal is a roll-over from last week.

A missed communication meant we did ours a little differently, Mr S got the rice going whilst I cooked the bacon so instead of flapping I chucked the veg stock pot into the rice and let it cook until I needed it. Brown rice takes longer than white anyway.

Fry the bacon until starting to crisp then remove from the pan and set aside.

Pop a little oil in the pan and add the celery, onion, chilli and garlic.  Cook until starting to soften then stir in the jerk seasoning and a little salt and stir for a couple of minutes.

Add the thyme, bay leaves and tomato purée and stir for another couple of minutes then add the rice (including the liquid) and stir well, add a little more water if required.

Give it a stir then bring to the boil. Add the cabbage, bacon and the beans then pop the lid on then simmer until the rice is cooked. Keep a check that it’s not drying out.

Remove the thyme and bay, check for seasoning and serve with a sprinkle of coriander. 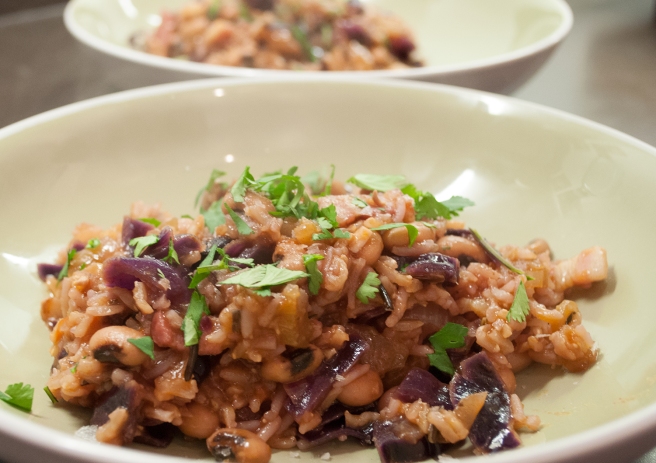 I usually make a different version but found this one on The Food Network website and wanted to give my version of it a try.

It’s clearly not an authentic Caribbean Rice & Peas, Where’s my scotch bonnet! This did have quite a kick as we used a full chilli and I went a little hard with the jerk seasoning. Good job we love it spicy!

We had burgers on Wednesday, purely for budgetary purposes, using up stuff from the freezer.

On Thursday night we made this Ching-He Huang recipe found on the Food Network. Here’s a fact for you, Yangzhou is historically one of China’s wealthiest cities and this rice was said to be invented by a magistrate (source: Wikipedia). There is no cooked shrimp in mine so I guess it’s not exactly authentic.

I* also used brown rice as that’s what we had in and it’s becoming a firm favourite here!

Cook some brown rice. It takes longer to cook so here’s how to do it – cover the rice with about an inch of boiling water, boil with the lid off for about 8 minutes. Pop the lid on, turn down to a simmer and cook for another 8 minutes. Turn off the heat, cover the rice with foil and pop the lid back on then leave to steam for about 15 minutes. Remove and spread out on a plate to cool.

Heat some oil in a pan and cook the shallot for a few minutes, add the mushrooms and leave to cook. Remove from the pan.

Season well and add the soy sauce then just before serving add the ketchup mixture.

Serve with a sprinkle of spring onions.

I would have loved to have added a handful of dried prawns as per the recipe but as I said earlier, I’m trying to budget.  I had no complaints though, it was very good and once again, like the jambalaya last week, seconds and thirds went down!

* I say I but my only contribution to this meal was peeling the ginger and stirring the onions. Well done Mr S – delicious. This might have to be his blog soon, I feel like a fraud 😉