It’s three years (and one day) since I registered for WordPress. I looked at a couple of my very early posts and thankfully it has evolved a bit since then.

And talking of anniversaries, it is 20 years since Jarvis Cocker stormed Michael Jackson’s set at the Brits. Which means it is 20 years since I went to see Pulp at the Sheffield Arena. I remember him walking out holding a copy of the Sun newspaper, of which he commanded the front page (and probably a few pages within I would imagine. The British media know how to milk a story). It’s also 20 years since Trainspotting was released. Twenty years though? Without sounding like my Nan, where does time go?

I was so hungry today. We went and did some work at Unbloq yesterday and before we knew it, it was 3.30pm and we hadn’t eaten a sausage. (Or a slice of toast for that matter.) We ended up buying a ready roasted chicken from Morrisons and making a chicken and chorizo sandwich. The problem was this was my first bread for a while and it filled me until about 9.30pm when I was ready to eat again but by then it was too late.

I resisted the urge to get a takeaway on Monday night and made this pasta bake instead. This is originally a Bill Granger dish but I changed it up a little bit. The bacon is actually pancetta and the cheese is not just any old cheese, it’s the delicious (and a personal favourite of mine) taleggio.

Cook the pasta (I used shells) until al dente, drain and set aside.

Stir the pancetta mixture through the pasta, along with the tomatoes and add to a baking dish.

This dish doesn’t need anything else. Just tuck in. 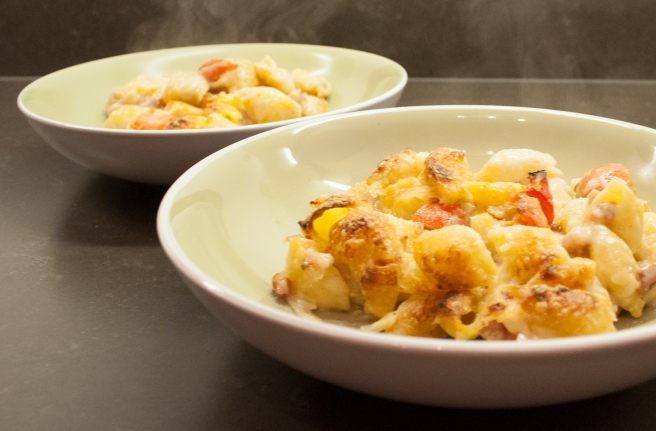 These were really different. Another thing I didn’t make, might have to hand this blogging thing over 😉

Where last weeks fish cakes were fiddly due to how ‘wet’ they were, these were quite fiddly for the opposite reasons. Mr S can cope though, if I’d have made these they would have definitely turned into a plate of fish hash.

Put the fish in a bowl along with the bread, chilli, ginger, coriander and spring onions. Add the egg and a few tablespoons of mayo, season and mix well.

Squeeze small handfuls together and then place in the fridge to chill for half an hour.

Heat some oil in a pan and fry gently (and carefully) on all sides until cooked through.

Serve on the chicory leaves with a sprinkle of chilli flakes.

This is a Bill Granger – Easy recipe.

It feels good to be back up to date on the blog. I’ve only done a three day week at work this week and the sun is supposedly going to shine tomorrow and I’m going to make the most of it by getting my side of the gardening sorted.

I’m also seeing my cousin Charlotte and it’s going to be a case of when Tilly me Walter. I hope it goes well.

As with yesterday, this is a Bill Granger Easy recipe

Pop the peppers and garlic on a baking tray and drizzle with oil. Roast in the oven for about 20 minutes. Let it cool slightly.

Put it all in a processor, along with the almonds, chilli flakes, vinegar, oil & seasoning and pulse. You don’t want it smooth, leave some nice chunky bits in there.

Mix the cheese with the parsley and breadcrumbs then season it. Coat the pork in the cornmeal, then the milk, then the cheese mixture.

Heat some oil in a pan and cook the pork  for a couple of minutes each side then transfer to a baking tray and cook for around six to eight minutes.

Serve the pork with a good dollop of the sauce.

Like pasta, I love my risottos baked, they just take on another dimension. This Bill Granger recipe was no exception. I mean – leek and goats cheese? A match made in heaven.

Add the onion, leeks and garlic along with a pinch of salt and cook gently, stirring often, until softened.

Add the rosemary and the rice and stir until the rice is well coated.

Pour in the stock, bring to the boil then add the cheese.

Cook in the oven for about 25 minutes. 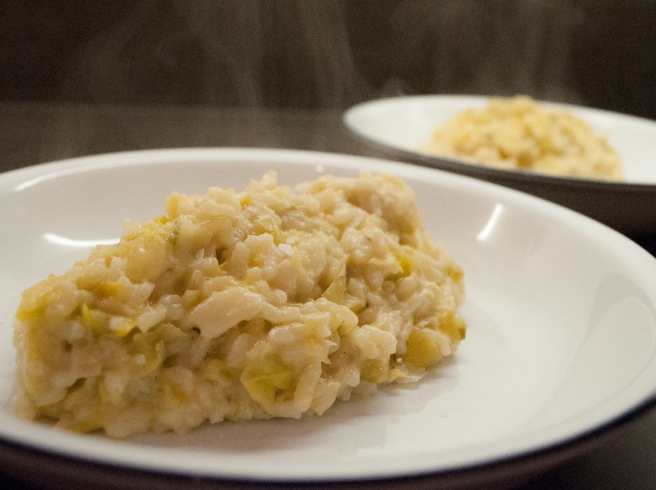 On Wednesday we ended up with a two meals for £7.95 of burger & chips for Mr S and scampi & chips for me. Cheap and cheerful.

I’ve had so many simple variations of this dish I can’t remember which I used to first make it (probably a BBC Good Food recipe) but I don’t thing it makes a difference as according to Wikipedia:

Petti’s moment of inspiration came when—near closing one evening—Petti found a group of customers sitting at one of his tables. He was low on ingredients and so told them he didn’t have enough to make them a meal. They complained that it was late and they were hungry. “Facci una puttanata qualsiasi,” or “Make any kind of garbage,”

This one is a slight adaptation of a Bill Granger one. I used up all different bits of pasta from the pantry for this one.

Heat the oil in a pan, add the garlic, anchovies and chilli flakes and cook for a couple of minutes.

Add the tomatoes and leave to cook whilst you get the pasta going.

Add the capers and cook until the tomatoes are starting to break down a little. Add the olives and season well.

Stir in the pasta and serve with a garnish of the parmesan and torn basil.

I always forget what a tasty and satisfying dish this is.

I think squid may well be my 2015 addiction. Unfortunately we couldn’t buy this fresh as the market was quite limited when Mr S went on Tuesday so we just bought a pack of frozen squid rings, not bad, but not as good as fresh.

In a saucepan, add a little olive oil along with the preserved lemon and the chilli. Add the chickpeas and warm through. Season.

Mix the ras el hanout and flour together and toss the squid in it.

Heat some oil in a pan and cook the  squid in batches.

Serve the chickpeas on top of the lettuce leaves then top with the squid.

This can be found in the Easy cookbook by Bill Granger.

Oh my, if I could eat this again today, tomorrow and the next day I would be happy. I adore taleggio and still remember the first time I had it and love a pasta bake, this hit all the right spots and I can promise you will see it again.

Mr S did the market shop today so balance is restored. He messaged me to ask what type of pancetta and although the recipe uses cubes I told him to surprise me and he went with slices, I think slices were better 😉

Cook the pasta in the boiling, salted water then drain and refresh.

Heat a frying pan and cook the pancetta until just starting to crisp then remove and pop to one side.

Add some oil and cook the onion until soft.

Stick the pancetta back in and then add the flour and stir for half a minute, gradually add milk, continuously stirring until you get a thickish sauce. Add two thirds of the taleggio and most of the thyme, stir to melt the cheese then season well.

Stir in the pasta then scatter the remaining taleggio, the parmesan and the thyme.

Bake in the oven for about 20 minutes.

It’s another Bill Granger Easy recipe. I should have photographed it as a portion as well to show it’s oozy cheesy goodness.

This was dinner…
Create a free website or blog at WordPress.com.