I went back to the gym for the first time in months today. It really is true that you don’t regret it when you are there, my waistline is telling me I regret not going. I just need to push myself to get there.

We should have been having Jamie Oliver’s Rich Grits last night but things didn’t go according to plan. I forgot to get the prawns out and I didn’t have the cheese. Not a very tasty rich grits. We had sausages, waffles and leftover chardonnay sauce.

Mr S was going to start the lasagne but got caught up with something else so we ended up eating this about 10.30 at night. This is fine if your are staying up until two in the morning but I was very tired. Not the greatest idea.

Pop the milk in a pan and add the onion, peppercorns and bay leaf along with a pinch of nutmeg.

Gently heat and just before it starts to boil, remove from the heat and cover. Leave to infuse.

Heat  some oil in a pan and add the onion. Cook until softened. Add the garlic and stir for a minute.

Add the beef and cook until browned, making sure you break up the pieces. Stir in the tomato paste and cook for another minute. Add the wine to the pan and turn up the heat, let it boil a little.

Add the tin of tomatoes along with the mushrooms and a dash of worcestershire sauce. Season well and bring back to the boil. Reduce the heat and leave to cook whilst you do the other stuff.

Strain the milk. Melt the butter in a pan and add the flour, keep stirring for a minute until combined (don’t let it burn). Remove from the heat and gradually add the milk. Stirring continuously so it doesn’t go lumpy. Pop back on the heat and simmer, still stirring, until thickened.

Spoon a third of the bolognese into an ovenproof dish. Cover with a layer of the pasta sheets, then a layer of the béchamel. Repeat twice more then sprinkle with the cheeses. Cook for about 40-45 minutes,

I had some parsley that needed using up so threw it on just for some colour interest on the photo.

This recipe is taken from a Good Housekeeping book called Healthy Family Recipes which I picked up on the cheap a few years ago.

When I cast my mind back to when we first embraced the cook books and started cooking ‘properly’, we made burgers. We were both underwhelmed and decided they were not worth the effort. Well of course now I know different and after trying various versions, these are the best, and the simplest. So good I think it is the 3rd or 4th time we have had them this year.

I’d actually froze these half-pounders the last time I made burgers, making the others as mere quarter-pounders*

These burgers are made using only minced beef brisket and a little seasoning. No onion, nothing else, pure beef brisket.

We gently griddled them until cooked through then added some sliced cheddar for the last couple of minutes, Adding a splash of water and the lid for a good gooey melty cheese.

We served these on toasted brioche buns with mayo on top and salsa on the bottom and some leftover onions from yesterdays barbecue.

*which is more than enough for me.

Scandanavian hash last Saturday and good old corned beef hash this Saturday. And guess what? Mr S managed to open the corned beef tin in one attempt, without the ‘key’ breaking off. Honestly, the 21st Century should have heralded a corned beef tin advancement!

Cook the potatoes in boiling salted water until just cooked. Drain and leave to dry out.

Heat some oil and butter in a pan and add the onion. Cook until softened.

Add the potatoes and cook for a while. Don’t turn them too often, you want them to start to crisp up before turning gently.

Add the corned beef and follow the same actions as with the potato, you want it to start to caramelise a little. Season well.

Served with baked beans and a fried egg.

Well what a day! I can see you roll your eyes as I say that I was worried about our first Walter walk. I shouldn’t have been. The only problem? I think he thinks everyone should love him!!

From approaching a new canine friend, to saying hello to adults and allowing children to pet him he was so bloody good! He most definitely loved all of the attention.

We are lucky enough to live close to Cusworth Hall which is a great place to walk your pooch, he wasn’t sure what to make of the ducks though. I didn’t take my camera out with me as I just wanted to enjoy his new experiences but I will soon.

I might have got a little tipsy on Saturday night what with anniversary and Mr S birthday bottles (thanks Emma) but still made this lovely hash.

Boil the potatoes in salted water until just tender.

Heat some oil in a pan then cook the onion until softened. Add the mince and brown. Remove from the pan.

Put some oil and butter in the pan and get a good heat on then add the potatoes and fry. Don’t move them around too much. As they start to brown add back the onion and mince mixture along with the spices and seeds. Stir well then add the stock and simmer until the liquid has gone.

Serve with a dollop of sour cream and a scattering of beetroot.

I would have most definitely used dill as it is delicious and so very Scandinavian but I couldn’t get hold of any.

Due our tipsyness on the previous evening we couldn’t be bothered so off the three of us trotted to Morrisons and bought pizzas. Naughty!

Hello February – Good to see you. I’m now into single figures on the number of days to wait until puppy time!

I’ve said it before but I’ll say it again. No matter how many delicious chilli recipes there are out there, and I’ve tried a few, this is the basic one we always go back to. It’s quick and it’s simple but it’s definitely not authentic and it is our comfort food and the only meal that has been a regular from the very beginning in our house, albeit with a couple of very slight changes over the years.

Heat some oil in a pan. Add the onion and cook until softened.

Add the mince and cook until browned, breaking down with a wooden spoon.

Add the mushroom, garlic and chilli and stir for a couple of minutes.

Empty in the chilli mix and stir well then add the beans and tomatoes and about half a tin of water. Season and stir well. Bring to the boil then reduce to a simmer and cover. Cook for at least 30 minutes but to be honest, the longer the better!

We served ours with rice and a sprinkling of cheddar. 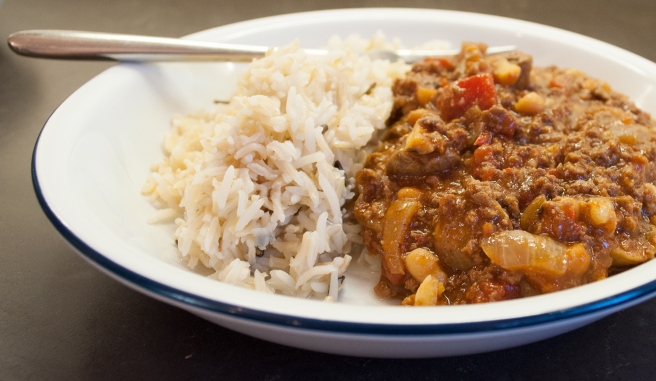 There are enough leftovers to go with a jacket potato at some point.

We were having the in-laws up today for 2nd (or is that 3rd?) Christmas. I made the Mushroom, Chestnut & Blue Cheese En Croûte yesterday (more on that tomorrow) for Mr S’ mum and the rest of us had this.

I’d hoped sticking a pot roast in would mean less time in the kitchen but they arrived earlier than I thought so I hadn’t done all my prep. Luckily, it appears there may be a budding chef in the family is my niece couldn’t wait to help!

Pat the meat dry and season well. Cut some holes in the meat.

Mix half the bacon with the thyme, garlic and some salt, push this mixture in the holes you’ve made.

Heat the oil in a casserole dish and brown the meat on all sides. Set to one side.

Brown the onion and push to one side then add the remaining bacon and the large carrot chunks and cook for a little while.Pop the beef back in the pan and add the thyme sprigs, bay leaves, sugar, purée and seasoning. Stir well, add the beef back to the pan and cover with a full bottle of red wine. Cover and roast in the oven for one hour and 45 minutes. Turn once during this time.

Add the small carrot pieces then return, covered, to the oven for another 45 minutes.

Remove from the oven and take out the meat to rest, covered with foil, whilst you boil the juices to thicken. Check for seasoning.

I can confirm that there were no leftovers whatsoever! I did forget to photograph the delicious pot of gravy it generated. We also had more vegetables and roast potatoes.

I know it looks a little dry on the photo but it melted in the mouth.

We had a great day. Lovely presents, great company and it appears that, due to a test run from Billy Bob & Ted (the Shih Tzu’s) our garden is puppy proof for when our new addition arrives.

A visit ot the in-laws was the order of this weekend.

On the way down I had a Macdonalds which must be the first time in about six years. They are not up to much are they? It filled a hole I suppose.

When we arrived on Friday we popped for a couple of drinks and then had a Chinese takeaway. I like having this at their’s as Mr S isn’t bothered about crispy duck but his Dad is so I always get to have it.

It’s safe to say the puppies were very happy to see us. The chances of us getting one in the new year are increasing.

On Saturday we went to see Paddington the Movie with our niece. What a great film! I thoroughly enjoyed it. We met up with Mr & Mrs S (snr) afterwards in Cafe Rouge where I ended up with another burger but this time, this one was quite impressive if a little expensive.

We had party food later that night.

On Sunday we had a huge ‘Christmas Dinner’ before having to go and get a train home. That was hard – all I wanted to do was sleep!

I suppose this weekend was the beginning of Christmas Indulgence

I was tired and a little bit grumpy today so didn’t take a photo of what turned out to be a delicious soup/stew.

Heat a pan and cook the chorizo slices on either side then remove from the pan and set aside.

Add the butter beans and a little stock then cook for a few more minutes. Season well.

Add the cabbage and the remaining stock then pop the lid on and cook until the cabbage is done.

Serve with a scattering of parsley and the chorizo slices and some lovely crusty bread to mop up that lovely liquid.

Inspired by a Saturday Kitchen Cookbook recipe. This is one of those dishes you could throw anything in.

I dug out an old Mary Berry cookbook for these fajitas with a radich pico de gallo. I was starting to get a bit panicky by today that I wouldn’t have everything done for Christmas Day.

Mix everything together and pop in the fridge to marinate for as long as possible.

Combine the tomatoes, radishes, onions, chillies, lime juice and salt. Cover and pop in the fridge until ready.

Pop the steak in a hot pan and cook to your liking in batches. Cover with foil.

Warm the tortillas. Serve the meat on the tortillas with some of the pico de gallo, a dollop of sour cream and some avocado. 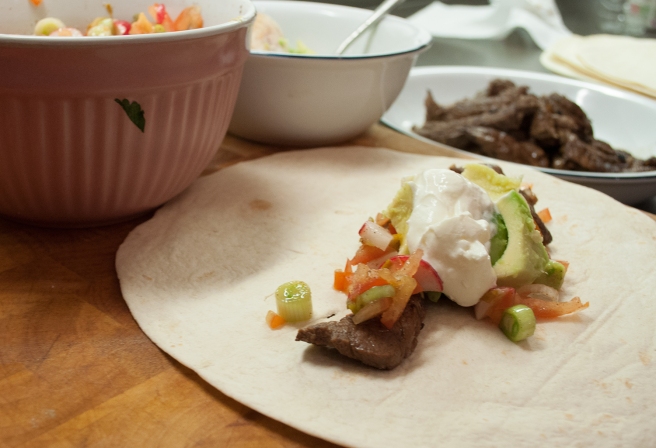 This was dinner…
Blog at WordPress.com.