As we were cooking these I thought they were going to be a sloppy mess. They weren’t, but I’d probably make them the day ahead next time as the leftover ones I sent round to my Dad and sister looked a lot easier to cook.

What is a slaw? Is it just a 21st century shortening of the word coleslaw? I can’t find a definitive answer but the original recipe calls this ‘carrot slaw’ but to me it would require another vegetable to make it a slaw so I’ve gone with pickled carrot and left it at that!

Put the sweet potato in a pan and cover with water. Bring to the boil then drain and rinse when the potato is cooked.

Heat some oil in a pan and gently cook the onion, garlic and mushrooms until softened. Season well.

Mix this with the potato and leave to cool.

Add the quinoa, beetroot, lime zest and coriander. Mix well and then add flour. Add a little or all of the egg to bind it together.

Divide the mixture into eight then form into patties. Chill for at least half an hour.

Add the vinegar, sugar and some salt to the carrot and set to one side.

When chilled, heat some oil in a pan and cook the burgers gently for 6-8 minutes on each side.

Spread some mayo on the bottom of the bun, drizzle some chilli sauce and top with the carrot mixture. 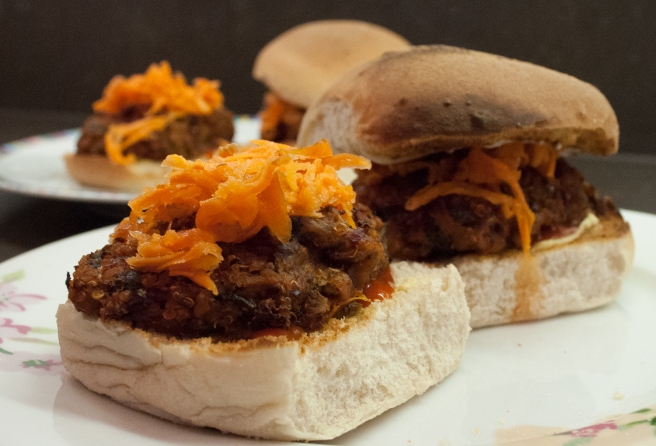